Conserving and Restoring River Habitats in the Tidal Hudson 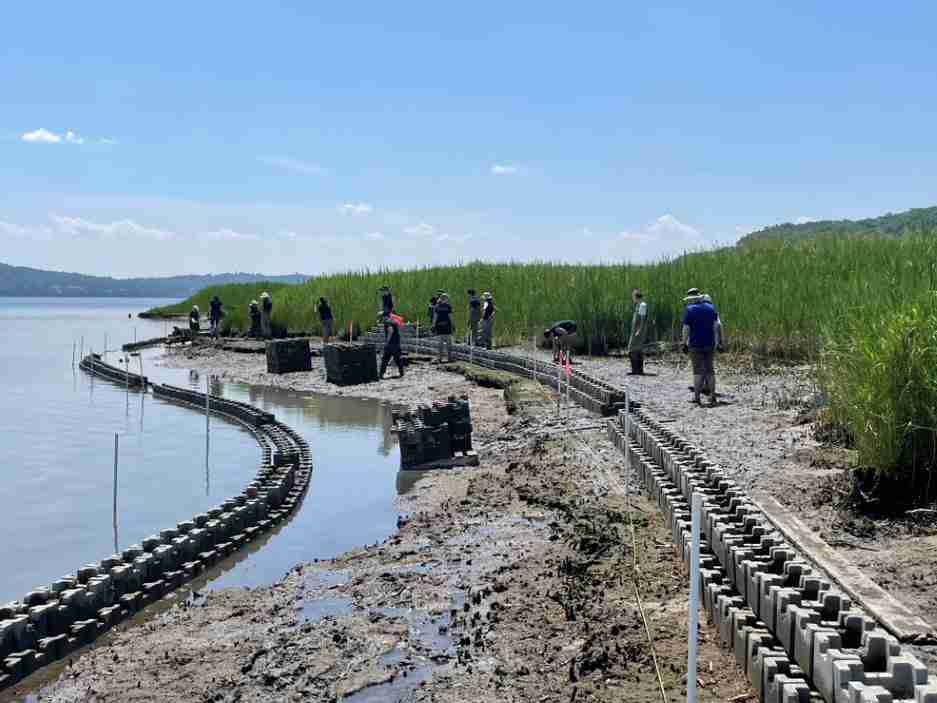 Piermont Marsh is one of four sites within the Hudson River National Estuarine Research Reserve (HRNERR) and is the largest brackish tidal marsh in the estuary, providing ecologically significant habitat that is uncommon in the region. Situated between the Village of Piermont and the Hudson River, Piermont Marsh is a vital part of the local community. During Hurricane Sandy, which severely impacted the area, the marsh acted as a wave buffer and filtered water-borne debris, which accumulated in the marsh instead of impacting residences and village infrastructure.

However, ongoing monitoring and a review of historical aerial imagery and maps indicates that the Piermont Marsh shoreline has eroded 1/2 to 1 1/2 feet per year over the past 75 years, resulting in an overall loss of marsh area and native low-marsh vegetation.

Since July 2022, HRNERR, in partnership with the New York State Thruway Authority and the New York State Office of Parks, Recreation, and Historic Preservation (OPRHP), has been implementing a pilot shoreline stabilization project at Piermont Marsh to help to protect against marsh loss and bolster the resilience of the village. The project is designed not only to protect a priority section of shoreline, but also to evaluate different treatments that could be used to stabilize other shoreline sites within Piermont Marsh or other areas of the Hudson River estuary.

Coir logs and two parallel oyster castle sills are being installed in the intertidal zone along the edge of the marsh to control erosion by reducing wave energy and promoting sediment accretion. Coir logs are long, coconut-fiber tubes that are nearly two-feet in diameter. Oyster castles (not used here to support oyster settlement and growth) are made of specially formulated concrete and have a modular design that allows flexibility in configuration. More than 8,000 oyster castles, each weighing 35 pounds, are being installed entirely by hand to construct the two intertidal sills. Once completed, the lower castle sill will be 274 feet-long and the upper castle sill will be 132 feet-long. Both sills are three feet tall and are curved to follow the shoreline. A fifty-foot row of coir logs will be installed behind the lower sill.

The sills are installed by hand at low tide by staff and local volunteers, including members of the Rockland Conservation and Service Corps (RCSC), pictured at the top of the page.

Side Channel Restoration at Gay’s Point

Historic dredge and fill activities for the construction of the federal navigation channel resulted in the loss of nearly 4,000 acres of shallow water habitat, including the near-complete elimination of side channels in the upper third of the Hudson River estuary.

In 2013, HRNERR began working with the New York State Thruway Authority to design and construct a tidal side channel at Gay’s Point in Stockport. The 1,200 foot-long by 100 foot-wide side channel was completed in 2017 and involved the excavation and onsite reuse of historical dredge material. More than 5,000 native plant seedlings and 600 woody cuttings were planted to restore a mosaic of shallow water, tidal wetland, and shoreline habitats. 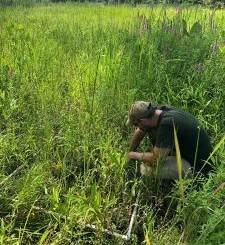 The channel design incorporated a variety of habitats including alcoves, root wads (tree trunks with roots still attached), and deep pools, to increase structural and functional diversity and provide refuge and cover for fish and wildlife. Intertidal benches, broad, relatively flat areas, were created along the edge of the channel to support intertidal marsh. In addition to enhancing the productivity, biodiversity, and health of the Hudson River estuary ecosystem, improving river flow at Gay’s Point has benefited a variety of recreational activities including birdwatching, fishing, and kayaking.

An intensive monitoring program was designed to document pre-restoration conditions, evaluate the success of this first-of-its-kind project on the tidal Hudson River, and inform plans for future side channel restoration in the estuary. Pre-restoration monitoring was conducted from 2014 to 2016 at Gay’s Point and at Hallenbeck Creek, a naturally occurring side channel near the Rip Van Winkle Bridge which served as the project’s comparison (reference) site. 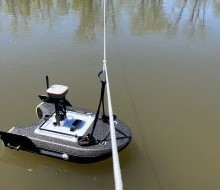 Post-restoration monitoring began in 2018 and has continued through the 2022 field season. The monitoring program included collecting data on water quality, sediment characteristics, vegetation, benthic macroinvertebrates, and fish. The water velocity and channel depth also are being monitored using an Acoustic Doppler Current Profiler to determine if target flow and depths are being maintained in the channel. Monitoring both the project and reference site will help evaluate if environmental conditions at Gay’s Point are similar to Hallenbeck Creek following restoration.

Preliminary results suggest that the flow of water through the channel is sufficient to maintain its depth and prevent the channel from filling in with sediment. The rapid establishment of tidal marsh vegetation, and benthic invertebrate and fish communities including river herring, also indicate the success of the project.

Dockside Park, in the Village of Cold Spring in Putnam County, is known for its exceptional views of the Hudson Highlands and access to the shores of the Hudson River. Owned by the Office of Parks, Recreation, and Historic Preservation (OPRHP), it is part of the Hudson Highlands State Park Preserve. The Village of Cold Spring shares in the maintenance of the park which is a popular spot for walking, sightseeing, and picnicking, as well as community events, including a summer film series.

In 2013, the Hudson River Estuary Program funded a preliminary design study by Milone and MacBroom LLC. to develop conceptual plans for a Sustainable Shorelines Demonstration Project, intended to stabilize the eroding shoreline while restoring or enhancing habitat to improve resiliency to large storms and sea-level rise. The study included several public meetings in the Village that gave park users the opportunity to contribute to the design process.

Funding for final design and construction was provided by OPRHP and DEC. Construction began in December 2021 and was completed in October 2022. Initial work included removing invasive species, riprap, and other debris. The shoreline was regraded into terraces protected by boulders and planted with native vegetation to help reduce erosion and provide wildlife habitat. The shoreline treatment varies within the site depending on exposure to waves and currents. A gravel path along the shoreline was created and a small nonmotorized boat launch was installed on the northern end of the park for kayaks or canoes to launch or land. State agencies will carefully monitor the shoreline seasonally and after major storms to evaluate the effectiveness of the shoreline stabilization.

Task Force participants developed a list of priority aquatic invasive species for the River, focusing on emerging invaders that may be more easily contained and eradicated. Monitoring methods and best management practices were also compiled for these species. In addition, the group launched a webinar series to help local stewards better understand these unfamiliar species, which, in some cases, are being studied in the Hudson River Watershed for the first time. Topics included round goby, which was discovered on the Hudson for the first time in 2021, and water chestnut, including a new species that has emerged in the Mid-Atlantic and may be heading our way. The final 2022 webinar focused on hydrilla management on the Croton River, a tributary of the Hudson.

The Task Force has also nearly finished creating a list of priority sites that will guide collaborative monitoring and control in the 2023 field season. The group plans to hold a series of workshops to prepare partners and volunteers to cover priority areas.
To learn more, visit the Hudson River Aquatic Invasive Species Task Force website.

For nearly a decade and a half, researchers at the Hudson River National Estuarine Research Reserve (HRNERR) have been studying the Hudson River’s shorelines to understand how they are changing over time. Now, community members can help. 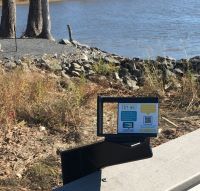 Atop the ADA-accessible boardwalk at Ferry Landing, a popular local fishing spot in Stuyvesant NY, a new CoastSnap has been installed in collaboration with New York Sea Grant. The Coast Snap is a small black cradle that holds a cell phone, so that visitors can take a photograph of a particular view. They can then use a QR code to submit the photo to a public database and add to an ongoing time lapse series.

The CoastSnap at Ferry Landing looks out over a part of the shoreline that was restored specifically to prevent erosion using techniques that mimic nature. Part of the Hudson River Sustainable Shorelines Project, this shoreline is a thriving ecosystem, where native plants hold the ground against wave energy while providing habitat for wildlife. Rip-rap helps reinforce the shoreline and dissipate waves. HRNERR researchers are interested in the longevity of this shoreline and others like it as climate change causes more intense storm events and water level rise on the Hudson.

Submitting photos through CoastSnap is just one way that community scientists can help monitor changes on our shorelines. CoastSnap is part of a larger suite of tools, known as MyCoast New York, which was launched by Sea Grant and other partners during the summer of 2022. Community scientists can use the MyCoast app to report flood events, storm damage, and more, to inform how New York can best adapt to climate change impacts. To learn more, visit MyCoast NY.